The art of weaving in Kashmir was introduced in the valley of Kashmir in the later part of 15th century by the king Zain-ul-Abidin, who had imported the art from Persia, that was the land of high art in the oriental world.

Kashmir carpets and shawls still follow the tradition of intricate geometric and calligraphic motifs and its beauty lies in the detailed needlework. The art flourished during the time of the Mughals and the tradition continued even during the troubled times of the Afghan and Sikh rules. The British came here in the early part of the 19th century and a certain utilitarianism came into the art that commercialised the woven products and Kashmiri carpets and shawls became the cynosure of the connoisseur’s eyes all over the world.

The industry suffered a setback when the valley was engulfed in a turmoil in 1989. As the Indian military forces and the separatist forces were locked in a brutal and long-drawn conflict, the ancient craft of weaving fell into troubled times with export orders drying up and inbound tourism hitting an all time low. A lot of artisans fled the valley creating a void.

Two and a half decades later, the valley has entered another crucial juncture and the lives of ordinary Kashmiris are threatened yet again. In the last four years, it had been a period of relative calm and the weavers and businessmen were beginning to get hopeful of a better future. Now, with escalating violence in the valley, their dreams of rebuilding the ancient craft industry is fading.

And the industry is plagued by other handicaps. The cost of raw materials, namely the wool of the pashmina lambs, have become prohibitively expensive; the market is abound with cheaper domestic substitues and most importantly, the young generation of Kashmir has become entirely uninterested in mastering the skill of weaving due to the low pay in this sector.

But the singular problem which threatens this beautiful craft is the continuing turmoil that had once dubbed Kashmir as one of the deadliest zones on planet earth. The people of the valley fear that this ancient craft of Kashmiri weaving may soon be a relic of the past. 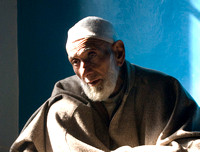