Theyyam is the corruption of the word ‘Daivam’ that means God in Malayalam, Kerala’s state language. An incredibly vibrant tradition that has been in practice for the last 1500 years, Theyyam is a deep rooted folk religion of Malabar, the northern region of Kerala. Where the Theyyam practitioner or the Oracle, in a state of exalted trance, becomes the physical manifestation of a deity. He is believed to be possessed with divine powers to heal, foretell the future and confer blessings on devotees. A Theyyam practitioner traditionally hails from scheduled castes, who are socially disadvantaged communities in Kerala where caste divisions are still very strong. But interestingly, during Theyyam, the oracle is worshipped as a living deity by all classes of people, even by the Brahmins, the community at the helm of the social system.

A visually rich cult with explosive colours of face and body painting of the practitioner, Theyyam is also a religious art with its dense layers of imagery and symbolism, where ancient chants are employed in conjunction with the ritual use of music, richly coloured fabrics and dance to visualize and invoke the deity. 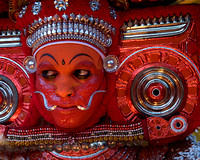 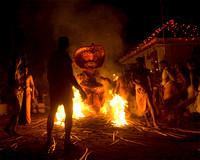 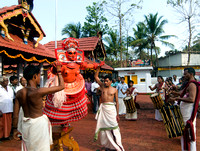