Home»Doms of Varanasi : : The Untouchable Guardians of the Dead

The holy city of Varanasi is a special place to die because a cremation in its burning ghats, as per Hindu beliefs, liberates one from the cycle of life and death. And a large number of dead bodies are brought to Varanasi everyday from far off places to be cremated at the Manikarnika and the Harishchandra ghat on the bank of the Ganga. The custodian of these sacred grounds is the Dom community. They are also the keepers of the sacred fire, from which the funeral pyre must be ignited to free the soul of the dead from the death-rebirth cycle. A fraternity of 500 people with a hereditary chief (called the Dom Raja) as the chief cremation undertaker, they are the guardians of the dead in Varanasi.

The Doms are entrusted with this task of carrying out a devout Hindu's final ritual, yet they are the ‘untouchables’ and cannot touch an upper caste Hindu. In fact, outside the premises of these two burning ghats, they are looked down upon as members of the lowest sub-caste. This custom has made it extremely difficult for them to take up a profession other than that of cremation undertakers.

Most of the Doms are financially quite well-off as the charges for cremation are arbitrary and quite exorbitant; although the community often charge a nominal fee from the poor.

The hereditary chief is a multimillionaire and lives in a palatial mansion overlooking the Ganga in Varanasi. However, like the 500 members of the community he leads, he remains an ‘untouchable’ to the society at large. Many of the doms want their children to enter into other professions and hope that a change in the outlook would bring about a change in their social status and they would be free of this ‘untouchable’ tag, someday. 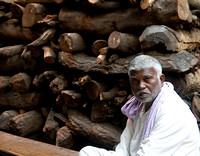